Approximately one year after the 2004 tsunami decimated Aceh province in Indonesia, it was decided that more needed to be done when it comes to communicating with those that were falling through the gaps. Thus, the Community Outreach Program (COP) was launched. The overall goal of the COP was to empower people affected by the tsunami to act on their own behalf. In order to achieve this goal it was clear that the program had to reach even the poorest of the poor communities. This was by no means a simple task, how can one communicate with beneficiaries that lack even the most simple communication tools. At the core of the COP was the CAU, the Community Advocacy Unit. The CAU managed an SMS gateway along with face to face interventions that provided the initial basis of engagement with the community. The SMS system allowed community members to voice their needs. From the information received from the SMS system the COP team members were able to analyze what some of the main gaps were in the rehabilitation and reconstruction process and work as advocates on behalf and with community members to try and deal with the issues. The CAU and COP team carried out training and FGD to build the capacity of communities to be able to interact with the many NGOs operating in the area and providing resources.

In Aceh, it was clearly not viable to use modern communication channels such as social media like Facebook and Twitter. The goal was to reach as many people as possible by utilizing a mix of communication tools including face to face and traditional media channels like newspaper, radio, and television. In Aceh it was cost effective to use Radio and TV and broadcast ‘live’ as opposed to pre-recorded methods. This allowed direct feedback from the audiences and live feedback from viewers and listeners by people calling pre-established phone numbers.

The COP team attempted to fill all of the gaps by different forms of media. In an attempt to always remain as relevant as possible, any feedback was recorded and logged into a database, which could then be used for the next newspaper, radio show, or television broadcast.

The Aceh case study shows the need to understand access to different communication mediums by communities as well as the need to use a mix of communication channels to reach the widest audience. It also highlighted that as much as people need information and that organizations need to engage with communities, there needs to be a measurable outcome from the engagement. 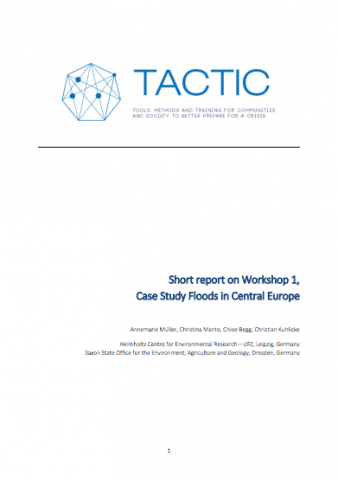 Risk-Sensitive Land Use Plan: Kathmandu Metropolitan City
28 Apr 2015
‘Land use planning has been identified as one of the most effective ways to take the HFA forward. For highly vulnerable cities like Kathmandu, a land use plan offers an opportunity to incorporate risk reduction into development and spatial plans by...
Tags: Report, Research