Skip to content
Short Report: TACTIC’s first workshop on preparedness for epidemics in the UK 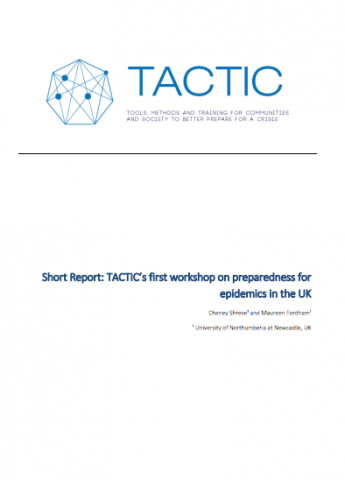 One of TACTIC’s overarching aims is to understand preparedness from a cross-boundary, ‘multi-hazard’ perspective. As a part of this effort, TACTIC partners are investigating floods, earthquakes, epidemics and terrorism through a series of case studies. Northumbria University is conducting a case study on epidemics in the United Kingdom (UK) focused on the 2001 Foot-and-Mouth Disease (FMD) event. While FMD is not uncommon in the UK, as between the years of 1918 and 1967 the UK was free from outbreaks of FMD for only 2 years (Scudamore and Harris, 2002), the 2001 event was unprecedented; the last major outbreak in 1967-68 FMD resulted in the slaughter of over 400,000 animals. The 2001 FMD event resulted in the slaughter of 4 million animals for disease control purposes and an additional 2.5 million killed that on welfare grounds (ibid). Additionally, significant damages were incurred to the tourism industry. Within a month of the 2001 UK outbreak, FMD spread to France, Ireland, and the Netherlands. FMD was initially framed in the UK primarily as an agricultural and animal health hazard, and yet what unfolded was a complex scenario, comprising cascading human, social, organisational, political, economic and environmental effects. One of the tasks identified for this case study is to explore the extent to which preparedness lessons were learnt at all scales: from the global to the local.

Short Report: TACTIC’s first workshop on preparedness for epidemics in the UK
https://www.tacticproject.eu/sites/default/files/publilcations/D6.1.FINAL_V2.pdf

Report
The value of Norwegian Red Cross domestic volunteering in 2019
08 Dec 2021
Menon Economics has developed a method for the Norwegian Red Cross to estimate the monetary value of the work of Red Cross’ volunteers in Norway during 2019 – a volunteering account. The volunteering account covers 63 national activities with mor...
Tags: Report
Research
Learning from the Ebola Response in cities: Responding in the context of quarantine
12 Mar 2018
As part of ALNAP’s Learning from the Ebola Response in cities, this paper describes approaches toquarantine in urban Guinea, Liberia and Sierra Leone. It focuses in particular on how humanitariansnavigated the context of urban quarantine, what ...
Tags: Research, Communicable Disease, Communication As Aid, Urban Risk Reduction
Case Study
DRR progress is slow – Bangladesh
14 Oct 2013
This video focuses on a case study from Bangladesh where people in the coastal village of Ghoserat, exposed to floods and storms, are starting to talk about the disaster risks they face. However they need education and financial resources to do more....
Tags: Case Study