Jessica Ports Robbins January 7, 2015
In 2009, for the first time, a majority of American adults reported the Internet was their preferred source for information and the most reliable source for news (Zogby Interactive, 2009). During disasters, the public is even more active online, increasingly turning to social media for the most up-to-date information. For example, after the 2011 Japanese tsunami there were more than 5,500 tweets per second about the disaster (Crisis Communication
Management, 2012). Social media, however, are used for more than information seeking or sharing during disasters; the public increasingly expects emergency managers to monitor and respond to their social media posts. A 2010 American Red Cross survey found an alarming 75% of 1,058 respondents expected help to arrive within an hour if they posted a request on a social media site (American Red Cross, 2010).
Given the increasingly important information role social media play during disasters, it is essential to understand what is known about social media use during disasters and what remains to be tested. Otherwise, policy makers and emergency managers risk making disaster communication decisions based on intuition or inaccurate information. To that end, this report summarizes what is empirically known and yet to be determined about social media use pertaining to disasters.
Fraustino, Julia Daisy, Brooke Liu and Yan Jin. “Social Media Use during Disasters: A Review of the Knowledge Base and Gaps,” Final Report to Human Factors/Behavioral Sciences Division, Science and Technology Directorate, U.S. Department of Homeland Security. College Park, MD: START, 2012.

Social Media Use during Disasters- A Review of the Knowledge Base and Gaps
http://www.start.umd.edu/sites/default/files/files/publications/START_SocialMediaUseduringDisasters_LitReview.pdf 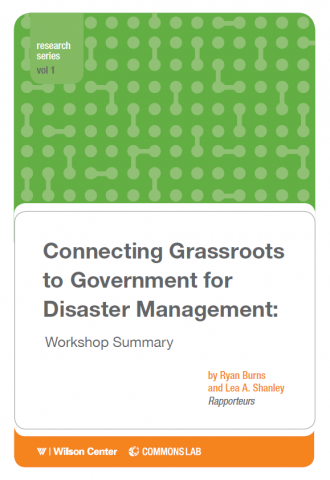 Connecting Grassroots to Government for Disaster Management: Workshop Summary
14 Apr 2015
The growing availability and use of social media and other mass collaboration technologies present new opportunities and challenges for disaster management. Platforms now exist that permit collection of data from broad constituencies and rapid commun...
Tags: Research, Crisis Mapping, Crowdsourcing, Mobile Technology
Research
Anchoring Study. Recommendations for the Good Usage of Anchors in the Humanitarian Shelter Sector
21 Oct 2020
Anchors and foundations more generally play an essential role in the structure of shelters. A failure of the anchors can be the first in a series of dramatic ones. Therefore, it is essential to perceive anchors as an integrated part of a building rat...
Tags: Research, Shelter
Report, Research
Targeting Guidance for Urban Humanitarian Response
21 Nov 2016
A Review of Needs Assessment Tools, Response Analysis Frameworks, and Targeting Guidance for Urban Humanitarian Response This desk review was produced by the Stronger Cities Initiative Consortium, which is part of the Urban Crises Learning Fu...
Tags: Report, Research, Risk Assessment, Urban Risk Reduction