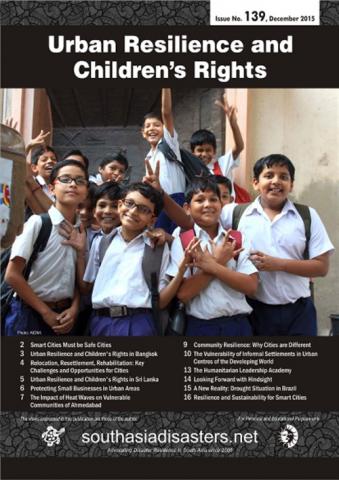 This issue of Southasiadisasters.net focuses on the theme of ‘Child Centered Disaster Management Planning in India.’ As widespread poverty and climate change exacerbate the risk of disasters on children, it is time to embed corrective policy mechanisms that protect children against such risks. State and district disaster management plans are the instruments through which this objective can be accomplished.

This issue highlights the ways in which children’s rights to safety can be upheld in India. Most notably, the traditional knowledge of communities in reducing the risks of hazards has been discussed. Special attention has also been accorded to how the Sendai Framework for Disaster Risk Reduction (SFDRR) enshrines the protection of children against disaster risks.

Video
Mozambique floods
05 Jun 2015
The heaviest flooding in over a decade to hit southern Mozambique has affected almost 250,000 people and destroyed towns and livelihoods. The floods have claimed 113 lives, which is still far fewer than similar floods in 2000 when over 900 people die...
Tags: Video, Flood, Livelihoods
Video
Mobile Technology’s Role in Natural Disasters and Public Safety Preparedness and Response
21 Nov 2014
On July 16, as part of the Mobile Economy Project, the Center for Technology Innovation at Brookings hosted a discussion on mobile technology and its evolving role in disaster and public safety.  Read the related paper here: http://goo.gl/puXmU
Tags: Video, Mobile Technology
Case Study
Uganda Red Cross Society: experience in community-based food security initiatives
08 May 2014
This case study provides an example of community-based food security initiatives in the northern and eastern parts of Uganda, which have the potential for long-term impact and can provide a blueprint for other communities facing similar food security...
Tags: Case Study, Food Security