Skip to content
Wetlands: a natural safeguard against disasters

sawyer.baker February 3, 2017
Using wetlands to minimize the damage from disasters
Defined as land areas that are flooded with water, either seasonally or permanently, wetlands are a natural buffer against disasters. Along the coastline, wetlands act as a natural protective buffer. For example, they helped avoid more than $625 million in damages from Hurricane Sandy in 2012. Inland, wetlands act as a natural sponge, absorbing and storing excess rainfall and reducing flooding. During the dry season, they release the stored water, delaying the onset of droughts and reducing water shortages. When well managed, wetlands can make communities resilient enough to prepare for, cope with and bounce back from disasters even stronger than before.
For more outreach material from 2016 World Wetlands Day:
#WetlandsForOurFuture – #WorldWetlandsDay – www.worldwetlandsday.org

Preparing for disasters: Fire – A road to resilience in Southeast Asia
24 Mar 2015
This educational comic for children and youth focuses on fire, issued as part of a series of A Road to Resilience in Southeast Asia comics covering 7 hazards (drought, earthquake, fire, flood, hygiene promotion, tsunami, typhoon and cyclones). The pu...
Tags: Awareness material
Case Study
Case study: Living on the river bank
04 Nov 2014
Climate change has made it increasingly difficult to predict when the river will overflow and force the families in the neighborhood to leave their homes. While in the past, floods used to strictly obey the circulation of the two seasons − rain...
Tags: Case Study, Climate Change Adaptation, Flood
Awareness material 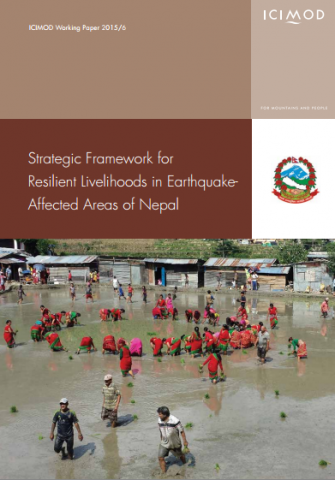 Strategic Framework for Resilient Livelihoods in Earthquake-Affected Areas of Nepal : ICIMOD Working Paper 2015
21 Jul 2015
This working paper aims to complement the Post Disaster Need Assessment (PDNA) of the Government of Nepal by providing insights into the livelihood dimensions of the earthquake and its socioeconomic and livelihood impacts. It explores the strategic c...
Tags: Awareness material, Earthquake, Livelihoods, Recovery