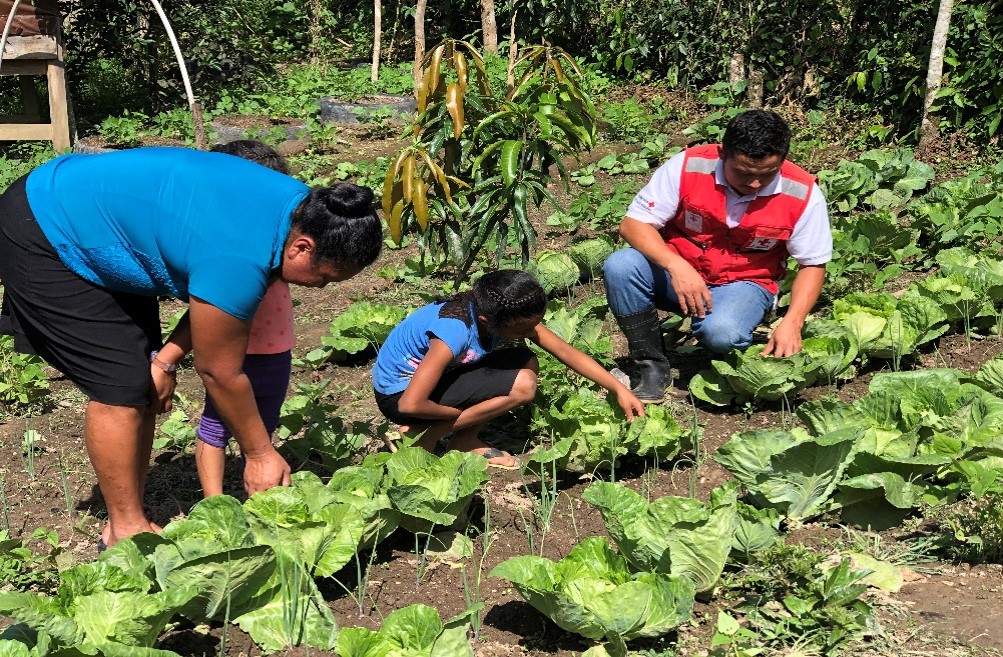 High levels of deforestation have led to soil degradation and erosion, increasing landslide risk in Olancho, Honduras. The majority of Olancho is a protected natural reserve or park, but there are high rates of deforestation, primarily caused by livestock rearing and industrial forest management. Small-scale farmers also contribute to this deforestation. These practices result in forest fires, soil degradation and erosion, increasing landslide risk. Olancho is also regularly affected by tropical storms and hurricanes coming from the Atlantic. This combination of exposure to adverse weather conditions and harmful use of natural resources causes significant material damage and even deaths.

To mitigate landslides and reduce disaster risk, the Swiss and Honduran Red Cross implemented a community-focused sustainable land management project utilizing bioengineering methods. A multi-disciplinary team conducted a comprehensive, participatory risk assessment to identify the areas most vulnerable to landslides. Bioengineering measures, including fascine drains and slope stabilization, were then implemented in these areas. Local communities and land users living in houses threatened by landslide hazards were directly involved in implementing the project. These stakeholders participated in the risk assessment and identification of implementation sites. They implemented the bioengineering measures on their land, as well as on public land to protect public infrastructure, with help from local emergency committees and technical support from the Honduran and Swiss Red Cross. The project also involved community workshops and home visits to raise awareness among beneficiaries about existing hazards and provided training to beneficiaries on bioengineering techniques, soil conservation and climate change.

Fascine drains are used to remove excess water from slopes that affect lands or houses in lower areas. Fascine drains are implemented by digging lateral ditches in a fishbone formation connecting to a main central drain. The system is generally built from the bottom of the hill, working upslope. The trenches are filled with ‘fascine bundles’ which are bunches of grass fixed in place with cuttings of trees that regenerate vegetatively. Soil is then added and the grass is sown on top of the fascines to avoid production losses.

Plants are established on the embankments to reinforce the soil with their roots and foliage, facilitating drainage and creating barriers to retain sediment. Vegetation can be combined with local materials such as rocks and wood to create living weirs.

The project has reduced landslide risk while promoting food security, health improvements and empowerment of local women. The project has mitigated landslides and reduced disaster risk, increasing community safety. For example, fascine drains control surface run-off and enable drainage of excess water, which has helped prevent and reduce the impact of land degradation and landslides, including during tropical storms. The project has also contributed to food security and health improvements. In most cases, the communities transform the stabilized slopes and embankments into sustainable production areas, such as agroecological family orchards or medicinal gardens. As a result, beneficiaries can diversify their diets and generate income by selling the produce from their orchards and gardens. The project has also empowered local women by putting them in management roles and providing training on the necessary skills to manage the medicinal gardens and family orchards. This has enabled women to perform jobs previously done only by men, giving women new roles in their families.

The project design also ensured that the disaster risk reduction practice established is sustainable and can be owned and implemented by the community moving forward. Even though the bioengineering techniques were implemented with technical assistance, the process is not complicated and the materials used are locally available. The methods are therefore easy to replicate. Given they are vegetative, they are also regenerative, making them highly sustainable risk management techniques. The participatory nature of the project has allowed for better community ownership, which will enable longer-term maintenance of the project. Land users actively participated in identifying, developing and building bioengineering techniques and were also provided with sufficient training to prepare and motivate them to maintain the implemented measures in the longer term. This has led to a high level of adoption of the technologies and a strong likelihood that communities would maintain them even after the Red Cross intervention has ended.

The engagement of local institutions and government was a key dimension of the project, ultimately promoting the integration of NbS for disaster risk reduction into local planning and budgeting. The project directly engaged local institutions in the delivery of the project. Local Emergency Committees (CODELs) were involved in implementing bioengineering techniques to protect community infrastructure, including schools and health centres. They also provided some support to household-level bioengineering works. The CODELs also coordinated with community members and other local groups, including health and water management committees, to identify community infrastructure for bioengineering works. This enabled better visibility of CODELs among land users. As part of the project, the Honduran Red Cross also delivered sensitization workshops to authorities and technicians in municipalities.

CODELs are part of the National System for Risk Management of Honduras. CODELs link communities with the national system through its higher level, the Municipal Emergency Committee. Candidates for CODEL must be accepted and approved by the community and included in the process to enhance local capacities for specific functions. CODEL members are trained to carry out all the steps involved in risk management (prevention, preparation, response, and rehabilitation).

For further information, please see WOCAT. (2017) Where people and their land are safer - A Compendium of Good Practices in Disaster Risk Reduction. Available at: https://www.wocat.net/library/media/122/

See a video on the soil bio-engineering approaches here.