The Great East Japan Earthquake and Tsunami (GEJET) triggered the Fukushima Daiichi Nuclear Power Plant accident (Fukushima Daiichi accident) in 2011, radioactive materials were released into the air and the sea. This forced the residents to evacuate from the surrounding areas of the power plant. In addition, accurate information about the accident was not shared and various opinions on the effects of radiation on humans spread. Under this situation, many of the affected people became more worried and fearful that they may be exposed to radiation and had a hard time mentally and physically for a long time.

In the case of a nuclear disaster, the Japanese Red Cross Society (JRCS) is expected to conduct relief activities under such unusual circumstances, different from natural and other disasters. Therefore, the JRCS relief teams, which do not have the expertise of medical care for radiation exposure, are also expected to respond to questions from the affected people and give advice to them regarding the accident and radiation. Moreover, in some situations, the relief teams may have difficulties communicating with the affected people who are anxious and fearful of radiation exposure.

For this reason, the JRCS created a booklet titled “Communication with Affected People during a Nuclear Disaster,” so that relief teams can communicate more appropriately with the affected people and provide the support that they need when a nuclear disaster occurs. It contains basic points such as the system of relief activities in the case of such a disaster, the psychological state of the affected people, and policies on communication with each person with sample dialogs. These are based on reflections from the Fukushima Daiichi accident. Since this booklet provides just sample responses, relief teams need to respond flexibly to each situation if a nuclear disaster occurs.

Other type of resource
RCRC Urban Newsfeed Compilation
13 Dec 2017
This is a compilation of the newsfeeds that was shared with the Red Cross/Red Crescent (RCRC) Urban Collaboration Platform (UCP) members since 17 June 2017. You can find brief information about the UCP here. You can also check out the resports of the...
Tags: Other type of resource, Urban Risk Reduction
Cases of Blended First Aid Training in Red Cross National Societies
17 Sep 2019
This short resource brings together the blended learning stories and experiences of seven National Societies in the RC/RC network practicing blended first aid training. Each case study highlights an element of the innovation that is happening in firs...
Report 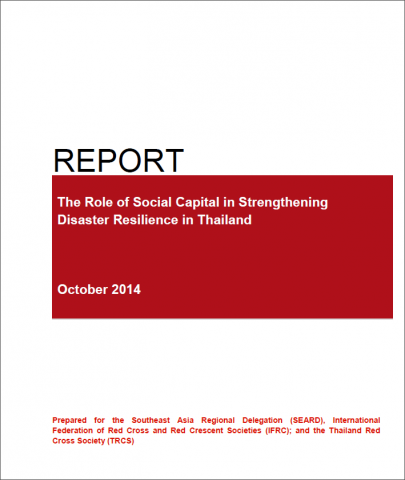 The Role of Social Capital in Strengthening Disaster Resilience in Thailand
24 Jul 2015
This study aims contribute the existing evidence base on how Social Capital can be harnessed to strengthen DRR in Thailand. While, social capital is generally recognized as an important means to building community resilience, there is still little kn...
Tags: Report, Resilience