Interview with Roger Bracke, Head, Horn of Africa Operations.
Despite efforts from the Ethiopian Government and from the farmers community, Ethiopia remains highly vulnerable to severe and chronic food security as a result (to a large extent) of its geographical location in a very hot and arid part of Africa, the Horn of Africa. In Ethiopia, agriculture still accounts for 80 per cent of all employment. Most of the agricultural production is at a subsistence level, with small-scale farmers cultivating
food on less than 1 hectare per family and most agriculture still essentially rain-fed. Average yields of key staple crops are low even in a normal year and a limited access to improved seeds, fertilizers and other agricultural inputs make it difficult for farmers to fully cover the consumption demands of a rapidly growing population. Dry spells are becoming more frequent, longer and more severe. The dry spells severely affect the capacity of farmers and pastoralists to produce food and directly affects their health as access to safe drinking water becomes critically low and the risk of infections grows exponentially.
Since the severe famines of 1974 and 1984/5 the Ethiopian Government, supported by its partners in the international humanitarian community, has committed itself to ensuring access to a minimum level of food.
This is done partly through the structural Productive Safety Net Program (PSNP) that is assisting roughly 7.5 million3 persons and partly through emergency food interventions that are guided by the Humanitarian
Requirements Report, a document that is produced and updated several times each year as required by the evolving needs. The Humanitarian Requirements Report serves as an appeal for cash and/or food to the
international community, and as a guide for their assessment and food-aid efforts which, in line with the 22 October 2009 version of the report, is targeting a total of 6.2 million beneficiaries in addition to the 7.5 million
individuals already supported through the PSNP.
This official figure of 6.2 million people in need is exceptional. During the August to December 2009 period the needs are normally at their lowest as the result of the Meher harvest which is responsible for more than
85 per cent of the countrys annual cereal production (see figure 2 below which illustrates this). The higher than normal figure of people in need reflects much larger than normal needs for assistance as a result of the
failure of the May to June Belg harvest, the second year in a row that this had occurred in several parts of the country as a result of late, very erratic or a total absence of rainfall. This caused severe food shortages in
Belg-dependant areas, including Amhar Region (Oromiya) and North Shewa Zone (which had already been the focus of assistance through the International Federations Horn of Africa Appeal). The harvest failure
attributed to the Belg rains also forced large parts of the population to reduce their food-consumption while anticipating the Meher harvest towards the end of the year. The situation was further worsened by the
Meher-related kiremt rains that were late in arriving and well below normal, particularly in the East 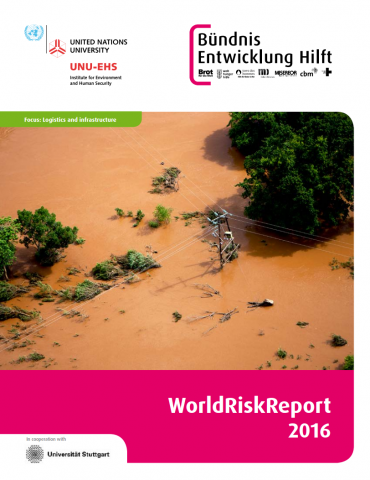 World risk report 2016: The importance of infrastructure
13 Jan 2017
The World Risk Report 2016 analyses the role that infrastructure plays in shaping a country’s disaster risk. The World Risk Index, calculated by the University of Stuttgart, is an integral part of the report as it ranks 171 countries according to ...
Tags: Research, Risk Assessment, Risk Transfer
Video
Early Warning Early Action
05 Jun 2015
The IFRC has focused its planning 2009-2010 on early warning, early action. This entails proactively using existing knowledge and resources to better identify risks and to act before disasters happen. This community-based, preventive approach not onl...
Tags: Video
Video
Building Capacities: Volunteers and Youth in Asia Pacific
25 Nov 2014
Building Capacities: Best Practices in Asia Pacific – Volunteers and Youth (1/5) The vast majority of human resources of the Red Cross and Red Crescent societies are volunteers. In all their diversity, both young and old, from all backgrounds, ...
Tags: Video, Capacity Building for Disaster Risk Management, Youth Preparedness