Skip to content
WATER AND SANITATION Getting the balance right

Lack of access to water and sanitation and poor hygiene is one of the principal causes of death and disease worldwide. It also leads to loss of productivity and forms a major barrier to development.

Globally, 2.5 billion people do not have access to basic sanitation facilities and as a result, the lives of billions of people are adversely affected. Sanitation receives only 12 per cent of the total pool of global aid funding for water and sanitation. While nearly 800 million people still lack decent water, reallocating funds more evenly makes sense given the larger needs in sanitation.

This video tells a story of two women: Sissylia Mhaka and Barbra Kurado who live in the rural areas of Zimbabwe, where over 30% of the population don’t have access to safe water and over 50% are living without proper sanitation.

Barbra lives in Mount Darwin where the Red Cross water & sanitation project completed in 2010. Two years after the project ended, 85 per cent of water points are still functioning, 96 per cent of latrines are still in use and there has also been a significant improvement in hygiene practices in the district.

Sissylia lives in Chivi where the second water and sanitation project has just started with the software component (hygiene promotion). Sissylia hopes for a better future.

These projects are part of the ten-year IFRC Global Water and Sanitation Initiative (GWSI) launched in 2005. The initiative aims at establishing and scaling up longer-term sustainable water and sanitation programmes. It is currently active in 75 countries, providing sustainable access to water, sanitation and improved hygiene. 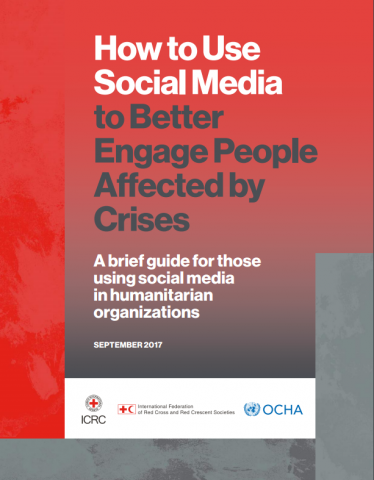 How to Use Social Media to Better Engage People Affected by Crises
18 Oct 2017
Online communication platforms have become a lifeline for millions of people affected by natural disasters and armed conflicts: social media and messaging apps help maintain contact with family and friends, and provide access to information, such as ...
Tags: Guidance material, Report