Skip to content
A Universal App for First Aid

In recent years, the American Red Cross and British Red Cross have both released a free First Aid App that offers simple, easy-to-follow advice for a variety of everyday first aid scenarios. These apps have been downloaded over 1.2 million times and continue to be a popular selection in both the Apple iTunes and Google Play stores. The high cost of app development, however, makes the creation of a quality app difficult, if not unattainable, for many other Red Cross and Red Crescent national societies around the world.

Recognizing the opportunity to take the app concept to scale, the Global Disaster Preparedness Center (GDPC) launched the Universal First Aid App Program in May 2013, introducing a phased approach for rapid expansion of the First Aid App into new markets within the Red Cross, Red Crescent network. Throughout the app development process, the GDPC provides national societies (NS) with technical assistance, serving as a liaison between the societies and the vendor, 3 Sided Cube.

Under the phased approach of the program, a participating national society is placed into a development cycle only when it has completed the translation and adaptation of app videos and content. The GDPC recognizes that national societies have varying levels of available capacity to complete these tasks, so it gives NS time to work on these at their own pace. To facilitate these first stages of the app development process, however, the GDPC has developed a series of tools and guides to better capacitate the NS. Examples of such tools include a java-based tool developed for easy offline translation, as well as a set of high quality first aid videos taken from the British Red Cross app that have been edited so that the NS can easily insert their own localized text and audio. A national society may certainly choose to make their own videos, but the availability of these easy-to-edit, high quality videos especially allow for many more national societies to participate in the program irrespective of available resources and technology.

In collaboration with the Global First Aid Reference Center, the GDPC has also created a web-based platform to facilitate the adaptation and localization of the First Aid app for national societies worldwide. Once a national society is entered into a development cycle, it is granted access to a unique content management system (CMS) developed by the vendor, in which NS are able to make and preview changes to the app content. Only changes to clinical first aid content require approval and can be sent by NS to the program’s partner, the Global First Aid Reference Center, for review. In the CMS, the national society is able to add images, links and information specific to its own country and society. Over time, even after the app is live, the NS can continue to update content via the CMS without having seek approval from the GDPC. In this way, the program design gives national societies full ownership of their app and its content.

In sum, this platform and the scope of the program are putting critical life-saving information in the hands of people at a scale the Red Cross has perhaps not reached before, essentially putting First Aid in the pocket of millions of individuals. The program design enables national societies to take full ownership of their app, and thereby allows them to connect with their public, provide country-relevant information, solicit donations and foster partnerships to support their own program. Furthermore, offering such an app to the public can complement the existing NS programs (i.e., preparedness and first aid trainings).

To date, 12 national societies have released the First Aid App in their respective countries. Already, there have been several stories shared by the app users that detail how the first aid app content has helped someone save a life. Additionally, there is evidence that the app has served as an important resource mobilization tool, helping to increase the number of first aid trainings. After the launch of its first aid app, for example, the British Red Cross saw its number of first aid training attendees grow by nearly one third.

Communicating and Preparing Rural Communities- The Case of Enlaza Mexico
By Renata Barradas Gutierrez
Communication is a key element in emergency response. Having access to communication before, during ... 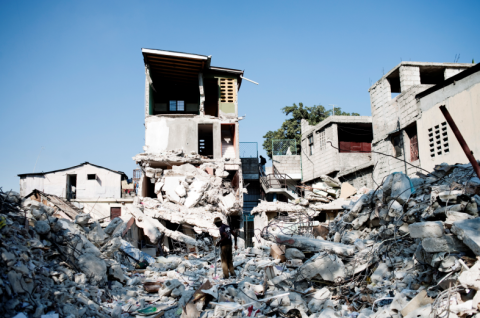