The following story was written by Lena Kang, Knowledge Management Intern, GDPC, based on an interview with Wendy Brightman, ‎Regional Advisor for Cash Transfer Programming in Asia, Middle East, and Europe at American Red Cross.

When Typhoon Haiyan struck the Philippines in early-November 2013, the International Federation of the Red Cross and Red Crescent (IFRC) assigned a field assessment coordination team to assess the situation and needs on the ground. Wendy Brightman, who serves as Regional Advisor for Cash Transfer Programming in Asia, Middle East, and Europe at the American Red Cross (ARC), was one of five cash transfer specialists in the Philippines. The assessment noted that the Philippines Red Cross (PRC) had already received preparedness training for cash programming before the crisis. PRC also had two business contracts in place with a remittance company and cell phone company to ensure a coordinated payment delivery system. In addition, even in the catastrophic aftermath of Typhoon Haiyan, the Philippines had a functioning market, operating cash delivery systems, access to shops and markets, and relative security. Wendy states that “in this context, cash transfer programming was a very feasible option for a population familiar with cash and cell phone use, in both urban and rural areas. The Philippines Red Cross had gone through cash preparedness training and had two contracts ready to be activated. During the assessment, all indicators were pointing in the direction of this kind of intervention.” 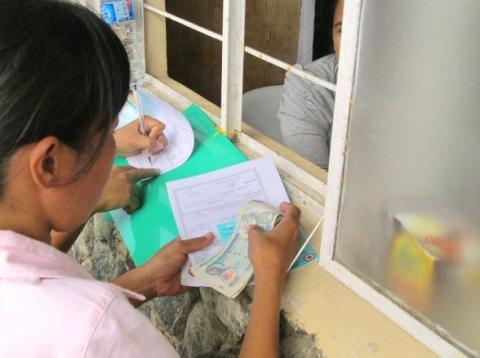 “When appropriate,” states Wendy, “cash programming allows beneficiaries to define and take charge of their own recovery. In disaster-affected areas with operating markets and available goods, a cash-based response provides beneficiaries with the freedom and flexibility to purchase basic and essential goods and services of their choice based on their self-determined priorities and needs rather than being restricted to ‘buckets and tents.’” On the islands of Leyte and Panay, Wendy and her colleagues had the combined target of distributing unconditional cash grants to 50,000 beneficiaries in four weeks –30,000 in Leyte and 20,000 in Panay. To date, this has been the Red Cross network’s largest and most ambitious cash transfer operation. 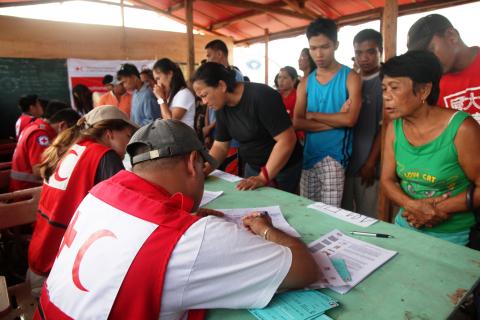 During an unexpected scenario in Panay, cellular networks were down and people could not convert codes from their mobile phones into cash at kiosks. To honor its contract with the Red Cross, the cell phone company decided to distribute cash directly to people. To facilitate this process, Wendy worked alongside the PRC to address logistical, operational, and security challenges in order to set up cash distribution centers. Through problem-solving, coordination, and community organization, the team established distribution sites where organizers could transport large amounts of cash in satchels and then directly distribute the cash to several thousand beneficiaries.

The evolving role of cash-transfer programming 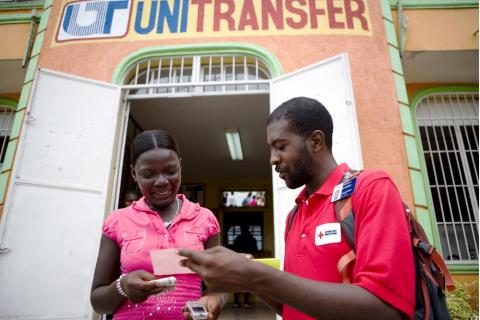 Four years earlier, the ARC went into Haiti immediately after the earthquake to implement a cash-transfer pilot program to target 1,500 households, with the broader aim of eventually reaching 40,000 to 50,000 households. In this case, the team spent up to four months on preparation work, including training, setting up delivery mechanisms, identifying and contracting a remittance company, and holding significant discussions within ARC. Much of the time was spent in contract negotiations and putting systems into place; however, the actual process of implementing the pilot program unfolded quickly and efficiently, meetings its target goal within two weeks. However, the idea of scaling up the program to target tens of thousands of beneficiaries was still relatively new and highly ambitious.

The differences in the scale, response time, and target for the cash-transfer operations between Haiti and Philippines reflect:

The Philippines Red Cross exemplifies the benefits of proactive cash preparedness. As part of contingency planning, the PRC team had received training to understand new tools in cash programming and had established pre-agreements with service providers before the crisis hit. PRC’s logistical preparedness measures, including pre-approved contracts with private sector partners, enabled the Red Cross to implement the cash transfer program quickly and efficiently.

“In cash operations,” states Wendy, “we’d like to see higher levels of investment in cash programming preparedness before the onset of humanitarian emergencies. The Federation and the American Red Cross strongly believe in and advocate for preparedness in cash-based programming. Going forward, we want National Societies to build the capacity to distribute money in quicker and larger ways. Through the funding we receive from Anne Ray Charitable Trust, the American Red Cross is actively moving forward in building preparedness within National Societies to implement cash-based interventions in emergencies.”

Using Information Mapping And Data To Refine Your Decision Making Process
By Global Disaster Preparedness Center
In the Greater Chicago Region of the American Red Cross we have been running a fire preparedness and...