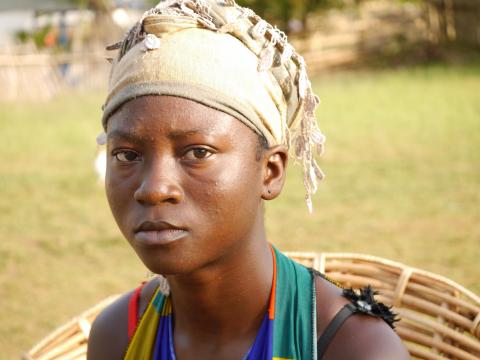 As the streets of Bopolu city wake, Tenneh Kamara sits quietly, hands in her lap and voice low. Motorcycle taxis have already begun beeping their way through town and roosters crow as they roam nearby. The Liberia National Red Cross Society volunteers who have come to support Tenneh lean in close to hear her story.

“It started in the morning hours, with a sharp pain in my neck. I tried to take a shower and later see if I could manage to go and sell my goods because it’s what I depend on for survival,” says Tenneh. She had no idea she had come in contact with the Ebola virus and thought the pain would pass.

“But to my utmost surprise, the pain got seriously heavy and I was unable to even wear clothes. I stayed in bed and people could not come around me.” Tenneh was living in Bomi County when she contracted Ebola. The virus had a serious impact on the County with 330 cases and 175 deaths. With the help of Red Cross volunteers, communities in Bomi quickly picked up the message of prevention and began keeping their distance from suspected cases. For days, Tenneh and her seven month old son were left to cope on their own.

For Tenneh, not being able to care for her infant was excruciating. “What was more painful than the virus was that my baby cried all day and night and I, as a mother, could not attend to him. He tried crawling out but the community people could not help that poor child. He cried for three days and three nights with his diapers all being wet and could not be changed.” When the county health team came, Tenneh and her son tested positive for the Ebola virus and were taken to the treatment unit, where her son died.

“My son died due to my weakness and I could not look after him because I was so weak,” she says.

Her grief and guilt are palpable. Making it that much harder, Tenneh is suffering the stigma that now follows so many Ebola survivors and their families. When she needs her community most, she is alone and shunned. Even moving to neighbouring county Gbarpolu, was not enough to escape the stigma. 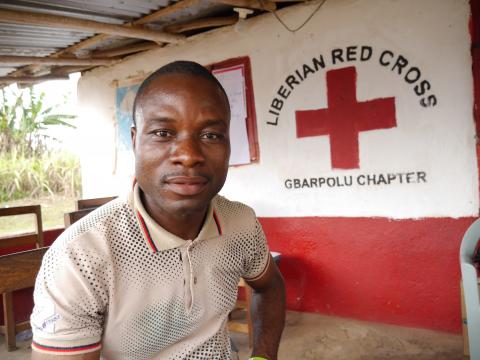 Henry Gbolunia is a volunteer with the Liberia National Red Cross Society working to overcome stigma in Gbarpolu County. “WhenTenneh walks in, everybody says, `oh the Ebola woman, the Ebola woman’. And because of that she feels she is not in the community.”

In response to the stigma happening all over the country, the Red Cross is sending teams of volunteers to communicate with communities and help them to understand survivors are safe, and to support their reintegration. “We’ve been talking to the people, telling them this girl is part of the community, she needs to live in the community, she is a part of you. We’re beginning to see that people are grabbing the concept,” says Henry.

But there is still a long way to go. Tenneh says, “I felt good when Red Cross people came to me and they have been the only group that has shown me love since my return from the treatment unit. I want the Red Cross to continue spreading Ebola survivor messages so people can accept us back into the community.”

The impact of stigma 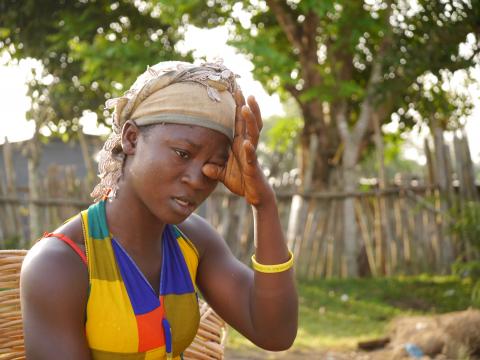 Joyous Momoh, the Liberia National Red Cross focal point for psychosocial support, says stigma in the community has a range of harmful effects for people who experience this discrimination. “Stigma can have dire effects on people’s livelihoods, causes emotional distress, and can limit access to basic and essential things like fresh water and food.”

The Liberia National Red Cross Society, with support from Movement partners, the International Federation of Red Cross and Red Crescent Societies (IFRC), Danish Red Cross, and the International Committee of the Red Cross, are expanding and tailoring psychosocial support programmes across the country. Joyous says, “We have trained psychosocial counsellors in each county, manning the national hotline to provide support to people affected, and identifying issues and challenges in the community resulting from stigma. This includes debriefing and therapeutic sessions for our safe and dignified burial teams, who suffer enormous stigma in their communities because of their involvement in their work. This is so heart-breaking because without them, who knows how much worse this crisis could have been.”

Social mobilization, which was so successful in addressing denial and rumours about Ebola during the peak of the crisis, is now a key tool in addressing the misinformation and fear causing stigma in communities. The Red Cross is working in each of the 15 counties, inviting communities to learn about stigma, its effects, and providing information and leaflets to promote awareness about the needs of survivors and their families as they reintegrate into their communities.

Volunteers are also working with schools, as they begin to reopen, providing workshops for teachers and leaders to help them identify and address issues of stigma faced by students returning to class.

The International Federation of Red Cross and Red Crescent Societies (IFRC) has launched a revised emergency appeal of 24.5 million Swiss francs to assist 4.5 million people who could be affected by the Ebola outbreak in Liberia. In total, IFRC has launched 16 Ebola operations in response to the Ebola outbreak in West Africa, targeting 39 million people. For more details on the Red Cross regional Ebola response, visit www.ifrc.org/ebola-crisis. 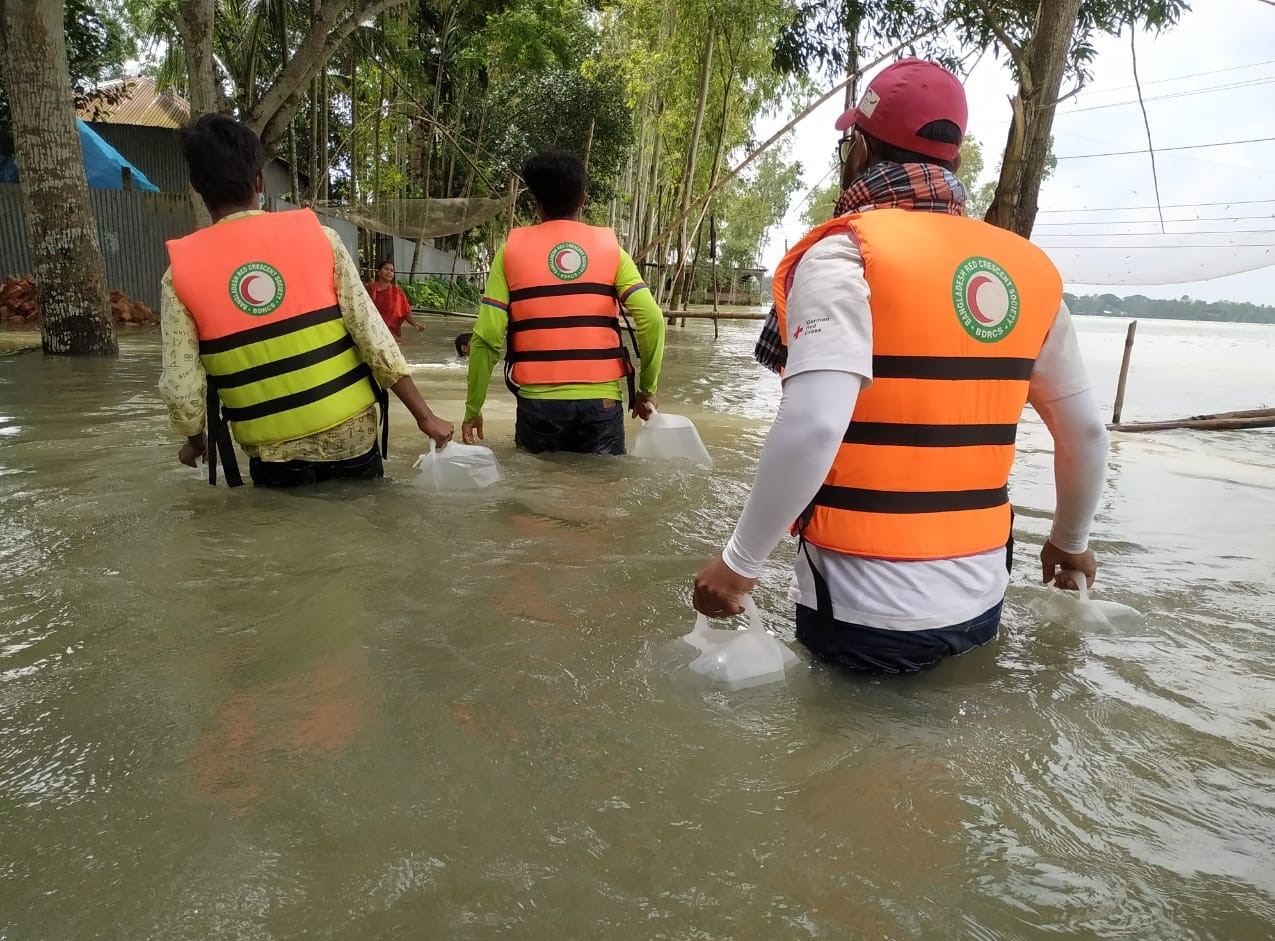 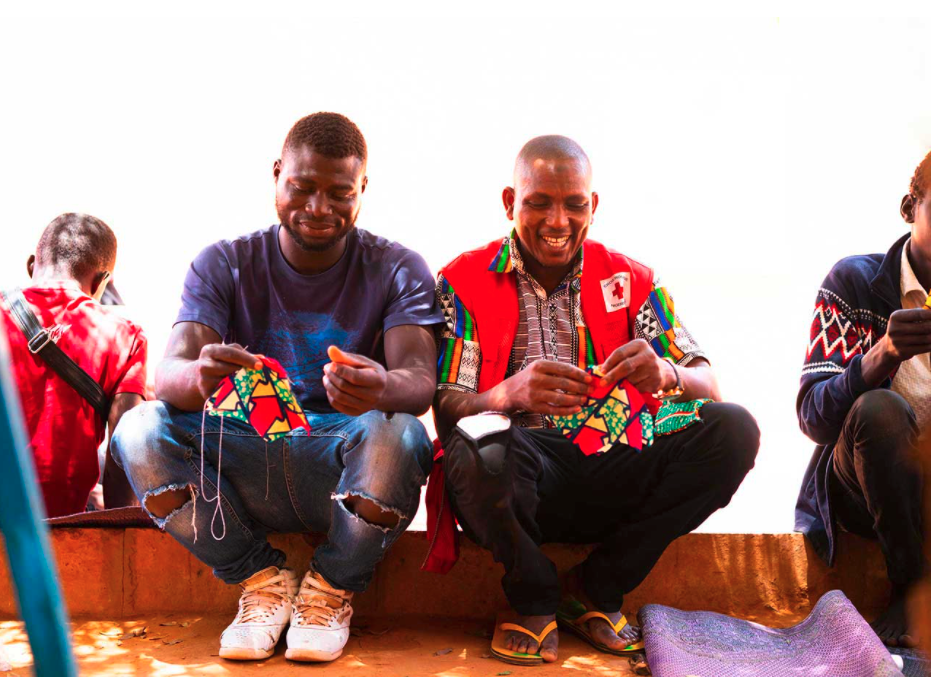 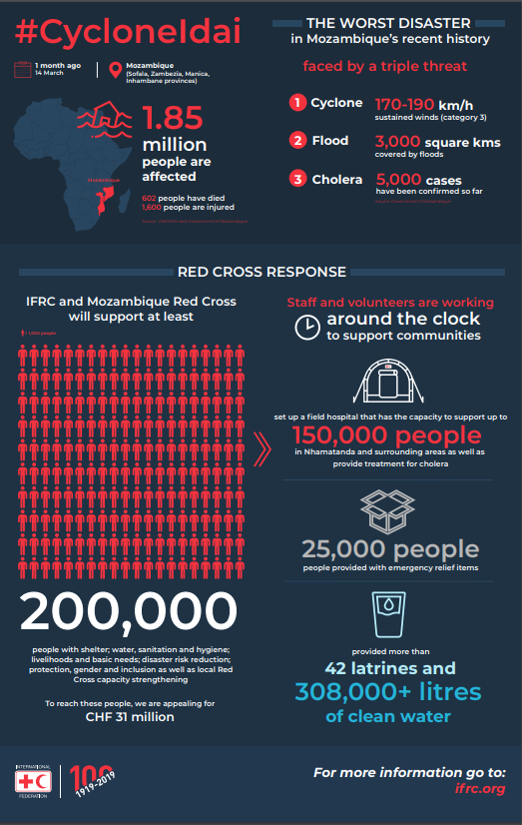 Mozambique: Cyclone Idai
By Miguel Aguirre
Originally shared by IFRC – 26 March 2019  Cyclone Idai made landfall on the evening of 14/1...