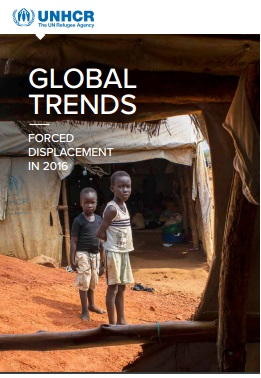 UNHCR’s new Global Trends report, the organization’s major annual survey of the state of displacement, says that at the end of 2016 there were 65.6 million people forcibly displaced worldwide – some 300,000 more than a year earlier. This total represents an enormous number of people needing protection worldwide.

The figure of 65.6 million comprises three important components. First is refugee numbers, which at 22.5 million are the highest ever seen. Of these, 17.2 million come under the responsibility of UNHCR, and the remainder are Palestinian refugees registered with our sister-organization UNRWA. Syria’s conflict remains the world’s biggest producer of refugees (5.5 million), however in 2016 the biggest new factor was South Sudan where the disastrous breakdown of peace efforts in July of that year contributed to the outflow of 739,900 people by year’s end (1.87 million today).

Third is asylum seekers, people who have fled their country and are seeking international protection as refugees. As of the end of 2016 the number of people seeking asylum globally was 2.8 million.

This adds up to an immense human cost of war and persecution globally: 65.6 million means that on average one in every 113 people worldwide is today someone who is displaced – a population bigger than that of the world’s 21st most populous country, the United Kingdom.

Among the report’s key findings, is that new displacement in particular remains very high. Of the 65.6 million people forcibly displaced globally, 10.3 million became displaced in 2016, about two-thirds of them (6.9 million) fleeing within their own countries. This equates to one person becoming displaced every 3 seconds – less than the time it takes to read this sentence. 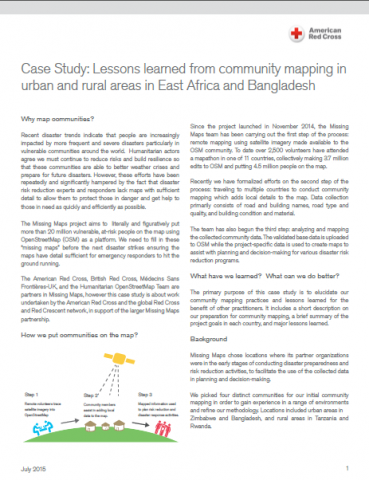 Case Study: Lessons learned from community mapping in urban and rural areas in East Africa and Bangladesh
12 Aug 2015
The Missing Maps project aims to literally and figuratively put more than 20 million vulnerable, at-risk people on the map using OpenStreetMap (OSM) as a platform. We need to fill in these “missing maps” before the next disaster strikes ensuring ...
Tags: Case Study, Crisis Mapping, Crowdsourcing
Report
Vulnerability and Capacity Assessment in Belize
01 Apr 2014
Case study and Guidance note to the VCA undertaken in Ladyville, Belize in 2005.
Tags: Report