sawyer.baker October 16, 2014
The 2014 World Disasters Report takes on a challenging theme that looks at different aspects of how culture affects disaster risk reduction (DRR) and how disasters and risk influence culture.
The report asks, for example, what should be done when people blame a flood on an angry goddess (River Kosi, India, in 2008) or a volcanic eruption on the mountain god (Mount Merapi). After the tsunami in 2004, many people in Aceh (Indonesia) believed that Allah had punished them for allowing tourism or drilling for oil, and similar beliefs were widespread in the United States regarding Hurricane Katrina, showing God’s displeasure with aspects of the behaviour of the people who live in or visit New Orleans.
Most people who live in places that are exposed to serious hazards are aware of the risks they face, including earthquakes, tropical cyclones, tsunami, volcanic eruptions, floods, landslides and droughts. Yet they still live there because, to earn their living, they need to or have no alternative. Coasts and rivers are good for fishing and farming; valley and volcanic soils are very fertile; drought alternates with good farming or herding. Culture and beliefs, for example, in spirits or gods, or simple fatalism, enable people to live with risks and make sense of their lives in dangerous places. Sometimes, though, unequal power relations are also part of culture, and those who have little influence must inevitably cope with threatening environments.
One important goal of this edition of the World Disasters Report is to bring these complex issues and clashes of cultures into the open for discussion, so that they can be much better incorporated into DRR work. 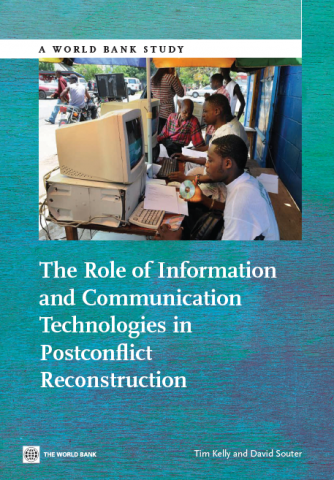 The role of information and communication technologies in post conflict reconstruction
09 Apr 2015
This report is concerned with the relationship between information and communication technologies (ICTs) and postconflict reconstruction, especially with ways in which ICTs can be used by governments and donors to support the transition from violence...
Tags: Report, Crowdsourcing, Mobile Technology, Recovery